Catherine Jacobson serves as president and CEO of Froedtert Health, a regional health care system based in Milwaukee, Wisconsin. Jacobson joined Froedtert Health in 2010 as executive vice president of finance and strategy, chief financial officer and chief strategy officer. She was promoted in 2011, becoming president and in 2012, she assumed the CEO role. Prior to joining Froedtert Health, Jacobson spent 22 years at Rush University Medical Center in Chicago in various leadership roles.

Jacobson served as the voluntary national Chair of the Healthcare Financial Management Association (HFMA) during the 2009–10 term. A member of HFMA since 1989, her involvement with HFMA includes serving on the national Board of Directors from 2004–10 and the Principles & Practices Board from 1995-2001 serving as chair during 2000–01.

Current board appointments include Vizient, United Way of Greater Milwaukee, the Greater Milwaukee Committee and Metropolitan Milwaukee Association of Commerce as well as other boards representing partnerships of Froedtert Health. She is also a past chair of the board of the Wisconsin Hospital Association and is currently serving on the board. 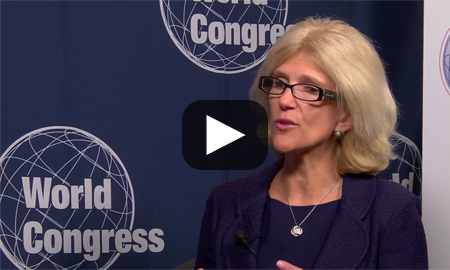 Catherine A. Jacobson talks about the Froedtert & MCW health network and the future of health care at the 2015 World Health Care Congress.

Jacobson’s recognitions include Distinguished Executive of the Year from the Junior Achievement of Wisconsin, Wisconsin Business Hall of Fame in 2018. She was recognized as a Women of Influence by the Milwaukee Business Journal in 2013 and received an honorable mention as Executive of the Year in 2014 and runner up in 2016. Jacobson received an honorary degree of Doctor of Healthcare Leadership from the University of Wisconsin-Milwaukee in 2015 and was recognized by Becker’s Hospital Review 2014 Health Care Leaders Award and one of Becker’s 24 Leading Women to Know in Healthcare.

Jacobson is a Certified Public Accountant. She received her Bachelor of Science degree in accounting from Bradley University, Peoria, Illinois.