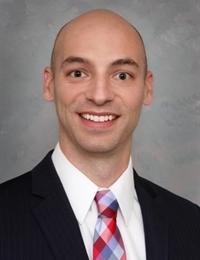 Call for an appointment

Dr. Jonathan Campbell graduated summa cum laude with a Bachelor of Science degree in biology from the Ohio State University in Columbus, OH. He received his Doctor of Medicine from the Ohio State University College of Medicine in 2011. From 2011-2016, he was a resident in orthopaedic surgery at the Medical College of Wisconsin in Milwaukee, WI where he received the MCW Department of Orthopaedic Surgery John S. Gould MD Lectureship Outstanding Research Award. He then completed an Orthopaedic Sports Medicine Fellowship at the Minnesota Orthopaedic Sports Medicine Institute in Minneapolis, MN. Dr. Campbell joined the Department of Orthopaedic Surgery as an Assistant Professor in September of 2017.

Dr. Campbell has served in the past as an assistant team physician in the following capacities during his Fellowship:

Team Physician to the Milwaukee Torrent

The comments are submitted by patients (or their caregivers) and reflect their views and opinions. The comments are not endorsed by and do not necessarily reflect the views of the Froedtert & the Medical College of Wisconsin health network. Learn more about our survey.

4.8 out of 5. 36 ratings, 3 reviews
Dr C always takes time, I don't feel rushed. Things are very well explained and he seems to care about my particular circumstances he doesn't just give me a blanket generic answer.
Dr Campbell and his staff are very good at explaining everything they did as well as being genuinely concerned about my knee injury and followup care!
good service
Visit froedtert.com/doctors for videos, patients reviews and more.