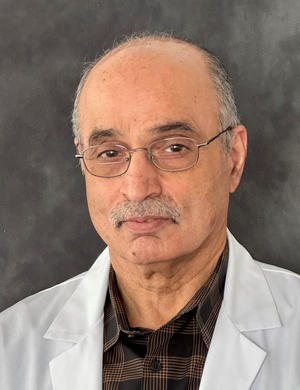 Call for an appointment

Dr. Kulwinder S. Dua completed his medical training in India (MD, DMSc Internal Medicine) and completed his fellowship in Gastroenterology and Hepatology in the UK. He passed the British MRCP examination and subsequently was elected as the Fellow of the Royal College of Physicians of both, the London and the Edinburgh colleges. In 1992 he moved to the U.S. and joined the faculty in the Division of Gastroenterology and Hepatology at the Medical College of Wisconsin where he is currently a Professor in the Department of Medicine and Pediatrics. He is U.S. board certified in Internal Medicine and Gastroenterology.

Dr. Dua’s primary interest is in advanced interventional endoscopy. He is an inventor and has several patents and FDA cleared devices. Another area of interest is studying aero-digestive tract physiology and pathophysiology including airway defense mechanisms against aspiration. (Awarded the Program Project Grant: PI on sub-project II.)

Dr. Dua has over 200 publications in peer-reviewed journals and is on the editorial board of several journals. He has been invited as faculty in several countries outside the U.S. including Canada, Brazil, UK, Netherlands, Austria, Italy, France, Israel, Oman, Egypt, India, Spain, and Malaysia. He is actively involved with the American Society of Gastrointestinal Endoscopy on the Training Committee, International Committee, ambassador to Ecuador and ASGE Consultant Expert, ACE, and has participated as faculty and as a director of several ASGE courses including First Year Fellow Endoscopy course, ASGE Stent course, and Hands-on course.

Some of Dr. Dua’s awards include the ASGE Master Endoscopist Award, the prestigious B.J. Vakil Memorial gold medal, and the Poona Oration Gold Medal awarded by the Society of Gastrointestinal Endoscopy of India. He has been on America’s Best Doctor’s list since 2002. He was the President of the International Dysphagia Research Society and the Milwaukee GI Society.

His hobbies include flying and he holds his private pilot’s license.

The comments are submitted by patients (or their caregivers) and reflect their views and opinions. The comments are not endorsed by and do not necessarily reflect the views of the Froedtert & the Medical College of Wisconsin health network. Learn more about our survey.

4.9 out of 5. 30 ratings, 4 reviews
Dr Dua was respectful, polite, very knowledgeable. and he listened and answered all my questions.
Dr Dua and the attending were very warm and attentive.
Dr. Dua's expertise in his field is outstanding. His explanations are thorough and understandable. We are so grateful to have him as a specialist for my pancreatic cancer.
He sat and explained things to me for a while.
Visit froedtert.com/doctors for videos, patients reviews and more.