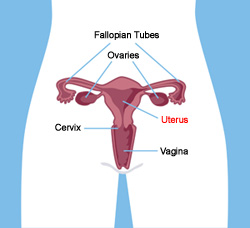 The uterus, a pear-shaped organ located in a woman’s pelvis, is composed of three layers. The endometrium, or inner layer, is the tissue that thickens every month in preparation for a potential pregnancy. The myometrium is the middle layer of the uterus and the serosa, or outer layer, covers only the upper part of the uterus.

Other symptoms of uterine cancer include pain during intercourse, when urinating or having a bowel movement, or pain in the pelvic or lower abdominal area.

Because uterine cancer is frequently diagnosed at an early stage, surgery to remove the uterus may result in a complete cure. However, proper diagnosis is crucial. A tissue biopsy will reveal the grade, or aggressiveness, of the cancer. The stage, or extent, of cancer is determined during surgery. The Gynecologic Cancer Program team includes pathologists who specialize in identifying gynecologic cancers. That expertise goes a long way toward increasing your chances of beating uterine and other types of gynecologic cancer, since treatment depends on accurate diagnosis.

At Froedtert & the Medical College of Wisconsin, a team of specialists design a treatment plan based on the grade and stage of the cancer, as well the patient’s overall health.

Hysterectomy. During a hysterectomy, a gynecologic oncologist removes the patient’s uterus, fallopian tubes and ovaries. Lymph node sampling may also be done to assess the extent of disease. Most patients are eligible for a laparoscopic , or minimally invasive, hysterectomy.

Depending on the grade and stage of the cancer, radiation therapy may be recommended. In vaginal brachytherapy, small radioactive implants are placed in the vagina to prevent cancer recurrence. Because brachytherapy can be targeted to a very specific region, the healthy tissues of the bladder and rectum receive very little radiation. And because the radiation is concentrated, treatment only takes three weeks.

Froedtert & the Medical College of Wisconsin were the first in the region to use high dose rate brachytherapy to treat gynecologic cancers.

If the cancer has spread beyond the uterus, external beam radiation may be required. At Froedtert & the Medical College of Wisconsin, many gynecologic cancer patients receive image-guided radiation therapy (IGRT), meaning that imaging scans are used to design the radiation fields. This allows the radiation oncologist to specifically target radiation to the desired area. Intensity modulated radiation therapy (IMRT) provides an even greater level of sparing normal tissues and preferentially treating the tumor tissues.

Chemotherapy may be used in conjunction with radiation for patients with advanced disease. Medical treatment may also be indicated for younger patients who hope to retain their fertility.

Safe and convenient virtual visits by video let you get the care you need via a mobile device, tablet or computer wherever you are. We’ll gather your medical records for you and get our experts’ input so we can offer treatment options without an in-person visit. To schedule a virtual visit, call 1-866-680-0505.

Cancer and the COVID-19 Vaccine

There is currently no data that suggests current or former cancer patients should avoid getting the COVID-19 vaccine. Cancer can weaken your immune system, so we recommend that most patients get the vaccine as soon as possible.

Learn More
More to Explore
From the Blog