Parkinson’s disease (PD) and related conditions are the result of lack of dopamine production in the brain and affect the coordination of muscles and movement. The conditions are chronic and progressive, often causing motor symptoms such as tremor, stiffness, slow movement and problems with balance/posture.

Ryan Brennan, DO, neurologist, describes the cause and symptoms of Parkinson's disease and treatment options, including deep brain stimulation.

According to the Parkinson Foundation, researchers suspect that Parkinson's disease is caused by genetic and environmental factors. It can affect people in different ways.

The four major symptoms of Parkinson’s disease are:

As symptoms progress, patients may have difficulty walking, talking or doing simple tasks. A diagnosis is based on a medical history and a physical exam with a movement disorders physician specialist. Usually, two of the four major symptoms must be present to consider a diagnosis of Parkinson's disease.

About 15 percent of patients originally diagnosed with Parkinson's disease begin to show signs of having “atypical” parkinsonism, also called “Parkinson-plus” syndrome. Parkinsonism refers to conditions that mimic Parkinson's disease, with symptoms such as tremor, slow movements, stiff muscles and balance and walking difficulties. These symptoms, however, are caused by another condition. Various conditions can cause parkinsonism or Parkinson-plus syndromes, and diagnosis can be complex.

Progressive supranuclear palsy (PSP) is a rare brain disorder that causes serious and permanent problems with walking and balance control. Symptoms include difficulty aiming the eyes, and mood and behavior changes. PSP begins slowly and progresses, causing weakness (palsy) by damaging certain parts of the brain.

There are three subtypes of multiple system atrophy:

Corticobasal degeneration (CBD) involves nerve cell loss and atrophy (shrinkage) of many areas of the brain including the cerebral cortex and the basal ganglia. The disease progresses gradually. Symptoms usually begin around age 60 and may first appear on one side of the body, affecting both sides as the disease progresses.

Diffuse Lewy body disease (DLBD) is a spectrum of diseases involving dementia and motor symptoms, and the second most common cause of dementia. Because the dementia is similar to that of Alzheimer’s, and other symptoms imitate Parkinson’s disease, the disease can be difficult to diagnose. However, patients with DLBD have hallucinations and are very sensitive to antipsychotic medications. DLBD is more common in men than women.

Vascular parkinsonism is a neurological disorder in which the symptoms are a result of small strokes rather than a loss of nerve cells. When one or more strokes occur in the basal ganglia (the part of the brain that controls movements) on one side of the brain, a person may develop parkinsonism on the opposite side of the body.

Our experts will meet with you to develop a personalized treatment plan based on how long you have had symptoms, your lifestyle and your treatment goals.

Our first step is to manage your symptoms with medication and other nonsurgical therapies. If your symptoms do not respond, we will evaluate your case to see if you are a candidate for deep brain stimulation (DBS).

As an academic medical center, we have broad access to clinical trials and will check to see if you qualify for any of them.

Most symptoms of Parkinson’s disease are caused by a lack of dopamine within the brain. Most Parkinson's disease drugs are targeted at replenishing or mimicking dopamine. These drugs reduce muscle rigidity, reduce tremor, and improve speed and coordination of movement. Medication may be changed or the dose may be adjusted depending on the severity of symptoms.

Froedtert & MCW health network is the first in the state to use Duopa™, a advanced approach to the administration of carbidopa and levodopa for the treatment of motor fluctuations for people with advanced Parkinson's disease.

As Parkinson's disease progresses, some patients may experience motor fluctuations from an "on" state, when symptoms are well-treated, to an "off” state, during which they are slower, stiffer and experience more difficulty moving. These states correspond to peak (on) and trough (off) plasma concentrations of levodopa. Patients may also experience dyskinesias (involuntary movements), generally at peak dose.

Duopa™ was approved by the FDA in 2015 as an enteral suspension for the treatment of these motor fluctuations for people with advanced Parkinson's disease.

How Does Duopa™ Work?

Duopa™ is administered using a small, portable infusion pump that delivers carbidopa/ levodopa directly into the small intestine via a tube placed by a percutaneous endoscopic gastrostomy procedure with a jejunal extension (J-PEG). Duopa™ provides patients with the same active ingredients as orally-administered carbidopa/levodopa immediate release, but is delivered in a continuous fashion throughout the day, which avoids the plasma level peaks and troughs seen with the oral medication.

While there is no known cure for Parkinson’s disease, available treatments help reduce symptoms, and carbidopa/levodopa is recognized as one of the most effective treatment for the disease. 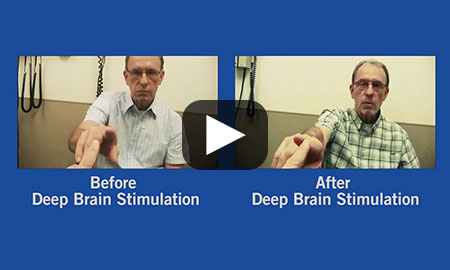 DBS involves implanting a thin wire, or lead, containing one or more electrodes, in the brain. The lead extends through a small opening in the skull and connects to a neurostimulator — a device that is similar to a heart pacemaker, only for the brain. The surgeon then implants the battery-operated neurostimulator under the skin in your upper chest.

After programming, the neurostimulator delivers controlled and adjustable levels of electrical signals to the brain to soothe symptoms of Parkinson’s disease. Learn more about the deep brain stimulation — the process, surgery and on-going care.

Our neurosurgery team has been involved in DBS since its outset, and has performed more than 3,000 DBS procedures.

Treatments Other Than Medication or Surgery

Staying active and pursuing therapy can help you adjust your lifestyle with Parkinson's disease. We offer a full range of therapy and other services to help you, including:

Learn more about the nonsurgical- and nonmedication-based Parkinson's disease programs we offer. Talk to your care team about these and additional options.

We will also provide you with resources to manage your Parkinson's Disease — including new patient orientation, classes, support groups and links to national associations.

Join the therapists from the Froedtert & MCW Neurologic Rehabilitation Program for a six-week exercise course designed for those with a Parkinson’s disease diagnosis.

Safe and convenient virtual visits by video let you get the care you need via a mobile device, tablet or computer wherever you are. We'll assess your condition and develop a treatment plan right away. To schedule a virtual visit, call 414-777-7700.