Travis Smith sought a second opinion when a rare condition caused him to suddenly fall whenever he was upset or anxious.

Travis Smith loves to hunt. But a rare condition he developed in his 30s made him afraid to go up into his tree stand.

“I never lost consciousness,” Travis said. “But I would lose all control of my muscles. It was terrifying, and I couldn’t hide it from the people around me.”

Travis, 41, of Fond du Lac, would suddenly fall whenever he was upset or anxious. His knees would go weak, and he would collapse. He was afraid this would happen when he was at work, which could be dangerous as a maintenance technician in a distribution plant where he often had to climb high up onto the racks. 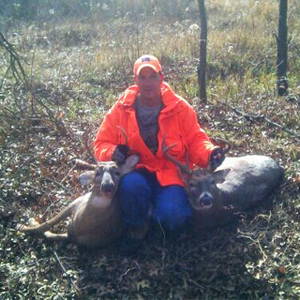 Travis shared his concerns with his primary care doctor, who referred him to a neurologist and a sleep specialist. After a sleep study, Travis was diagnosed with sleep apnea. Sleep apnea is the most common sleep disorder and causes a person to stop breathing for short periods of time (10-30 seconds) while sleeping. He was prescribed a continuous positive airway pressure (CPAP) device to wear at night.

“The CPAP machine wasn’t helping,” Travis said. “I was struggling to sleep with it, and something about the diagnosis just didn’t feel right.”

As months went by, Travis’ condition got worse. He had begun to isolate himself to make sure he was in a safe environment in case of a fall and tried to suppress emotions that might bring on a spell. He felt hopeless and became depressed.

“It got to the point where my daughters would carry my plates from the kitchen counter to the dinner table for me, in case I would fall,” Travis said.

Travis wanted a second opinion, so he made an appointment with Rose Franco, MD, a sleep and breathing specialist at the Froedtert & MCW health network. She suspected Travis did not have sleep apnea, but instead a rarer condition: narcolepsy with cataplexy.

“Narcolepsy is a condition of the brain where certain chemical neurotransmitters aren’t being made in the right amounts, resulting in sleepiness at the wrong times,” Dr. Franco said. “It can also be associated with spells of muscles weakness, called cataplexy, which happen when people are really excited, really upset or startled.”

Patients suffering from narcolepsy with cataplexy sometimes cannot appreciate that they are incredibly sleepy because they focus on the debilitating spells of muscle weakness. When we are in deep sleep, otherwise known as rapid eye movement (REM) sleep, the brain sends signals out to stop muscle function. During episodes of cataplexy, these parts of the brain become active while we are awake. The neurotransmitter hypocretin is responsible for helping to control a stable condition of awake or asleep in the brain, much like a master switch.

“Research shows hypocretin is only low in patients with narcolepsy with cataplexy and a few other extremely rare conditions with cataplexy symptoms,” Dr. Franco said. “As a patient, there is an advantage to being seen by a physician at an academic medical center because we are closer to the research, we see the more uncommon conditions on a regular basis and we have more experience treating those conditions.”

Narcolepsy has been recognized as a condition for hundreds of years, but it was not until 1998, when scientists isolated the neurotransmitter hypocretin, that they discovered it was lacking in people who have narcolepsy with cataplexy. More research needs to be done to understand the exact cause of the disorder, but according to the National Institute of Neurological Disorders and Stroke, it is influenced by both genetic and environmental factors.

While measuring the hypocretin levels in the cerebral spinal fluid is the gold standard for diagnosing narcolepsy with cataplexy, this technique is only used when the physician is not sure that the full condition is present. Dr. Franco already suspected narcolepsy with cataplexy so she did not need to do the spinal tap. Instead, she performed a series of simple tests on Travis in the sleep center to verify her diagnosis. She prescribed medication to manage his condition, and he has not fallen since.

“The second opinion changed everything for me,” Travis said. “I know when my family has a serious health concern, Froedtert is where we need to go.”

Five Myths and Truths to Know Going Into Flu Season

Put Your Health First This Fall