Steve was at increased risk for skin cancer. After a mole was biopsied, he was diagnosed with early stage melanoma which later spread into metastatic melanoma.

Steve Villeneuve, 51, of Milwaukee, has red hair, fair skin, freckles and plenty of moles, all factors that increase his risk of skin cancer. When his dermatologist biopsied a small mole on Steve’s right leg during an office visit in May 2016, he wasn’t concerned. He had many moles removed in the past and sent to the lab for diagnostic testing.

“I didn’t even blink an eye about it,” he said. But within a few days, he received the startling news that this particular mole was early stage melanoma.

Steve had a surgical procedure the following week to remove the mole and neighboring tissue, which his dermatologist declared a success. But while cycling the following summer, he felt some tenderness in his right groin and found a small lump there. A biopsy showed that the melanoma had spread.

His dermatologist, who is in private practice, referred Steve to advanced skin cancer specialist Callisia Clarke, MD, MS, a surgical oncologist with the Froedtert & the Medical College of Wisconsin Cancer Network and an MCW faculty member. In July 2017, she removed the lump and lymph nodes in Steve’s right groin.

Around that time, Steve and his wife, Ann, also met with Amy Harker-Murray, MD, medical oncologist and MCW faculty member, to discuss post-surgery therapies to prevent the cancer from coming back. Advanced melanoma is treated with immunotherapy or immune checkpoint inhibitors, relatively new medications that stimulate the patient’s immune system to fight the cancer. Froedtert & MCW researchers are engaged in cutting-edge clinical trials for immunotherapies.

“Because Steve had ulcerative colitis, an autoimmune disease that involves inflammation of the colon, immune checkpoint inhibitors were not the first step for him,” Dr. Harker-Murray said. “For some people, this type of treatment could worsen colitis symptoms. Instead, we recommended careful surveillance so the team could activate immunotherapy right away if and when the melanoma grew.”

Steve had periodic positron emission tomography (PET) scans to check for cancer growth. In December 2017, imaging revealed cancer in a lymph node, as well as multiple metastases in his liver.

Dr. Harker-Murray recommended that Steve start immunotherapy. Typically, patients with advanced melanoma receive two immunotherapy medications simultaneously. Steve’s medical team personalized his treatment, opting to give him just one immune checkpoint inhibitor, called nivolumab. He received infusions every two weeks at the Cancer Center at Froedtert Menomonee Falls Hospital, which is close to his home and part of the Froedtert & MCW Cancer Network.

“I had no side effects at all,” Steve said. In fact, he rarely missed work at the school where he serves at an IT specialist. The single therapy was effective. Within three months, diagnostic imaging showed that the spots on his liver and lymph node had disappeared.

“It was a big relief, I’ll tell you that,” Steve said. 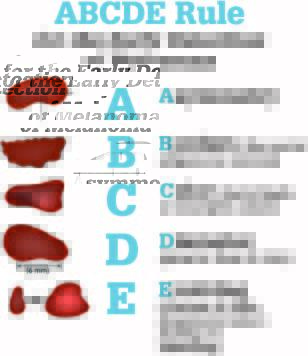 The Advantage of Experience

Steve continued receiving infusions and was doing well until November 2018, when blood tests revealed he was anemic, a possible sign of intestinal bleeding. Another PET scan showed two spots on his small bowel that were likely cancer. Steve had a colonoscopy, an endoscopy and a capsule endoscopy, but none of those diagnostic tests could find the lesions shown by the PET scan.

That’s when Dr. Harker-Murray consulted with Dr. Clarke, who recommended that Steve have a minimally invasive surgery to examine his bowel. Research shows that the bowel is a common site for metastatic melanoma.

In February 2019, Dr. Clarke made a small incision around Steve’s navel and located two lesions, which were indeed melanoma. She removed areas of his bowel, and he was well enough to return home within a week. The surgery’s success was evidence that experience with advanced melanoma matters.

“I see a lot of patients with melanoma who have progression in small bowel disease while everything else is stable,” Dr. Clarke said. “Removing the small bowel metastases can dramatically improve overall survival.”

Steve soon resumed the immunotherapy infusions, which continued until April 2020, when he’d reached a year without new metastases. He continues to have regular checkups with Dr. Harker- Murray, as well as PET scans. He also has skin checks by his dermatologist.

He recently celebrated a happy anniversary: two years without a cancer recurrence.

“I’ve had such a great experience with everybody within the Froedtert & MCW Cancer Network,” Steve said. “I never once felt like this was a dire situation. Everybody was so positive and had great things to say about these melanoma treatments. That gave me hope I could beat it.”

Thank you for sharing this. We are in early melanoma diagnosis and this article put us mildly at ease.