After learning of Alex's relapse in October, our first impulse was to circle the wagons. Alex's doctor offered him a spot in a clinical trial for immunotherapy. Although participating in the trial meant many trips to Froedtert Hospital, we felt it was important to take the chance. Our daughter and son-in-law live in Oshkosh, so staying with them saved a bit of drive time compared to driving from our Fox Cities home. 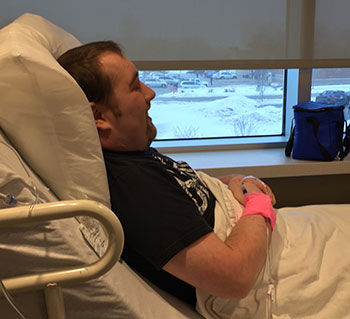 The trial drug was given on a 21-day cycle and required visits to the hospital on six of the 21 days. In a six-week period, I think we drove enough miles to equal a trip to California and back. My husband, daughter and I took Alex to his appointments. Things went very smoothly until three days before he was scheduled for a PET scan and his third treatment.

One possible complication of the treatment was a rash. It was not common, and those who had developed the rash had it over only a small part of their bodies. Alex started with red, puffy eyelids and within about 72 hours, he had a rash over more than 75% of his body. They put him on Prednisone, and we delayed treatment for a week. Then we delayed treatment for another week. At that point, the decision was made to discontinue Alex from the trial. We were disappointed, but we always had a back-up plan. Our next plan was to begin Opdivo, an immunotherapy that was FDA-approved only last spring.

The decision was made to switch treatments in December, and we ended up with a two-week break to finish Prednisone. Then Alex couldn't start the new treatment until he had been off Prednisone for five days. That gave us a great break to enjoy the holidays. Christmas 2015 was spent in the hospital for his stem-cell transplant, so I was determined to enjoy this holiday. We had a nice mix of family events and time to relax. After two very intense months, it was nice to have a short break. Alex' rash gradually improved, and he felt better.

Alex started Opdivo in January and has had four treatments so far. Side effects have been minimal — some fatigue and loss of appetite, and an increase in anxiety that was likely due to the Prednisone.

One of the side effects to watch for is a cough — which could indicate pneumonitis, an inflammation of the lungs that can result from the treatment he's on. He developed a cough and shortness of breath over the last several days, so today he had to go in for labs and a chest X-ray. It looks like the cough is due to pneumonia, so he's taking an antibiotic. (Weird to think that a diagnosis of pneumonia is "good" news.)

After two more treatments, he'll have a PET scan to see if this treatment is working. (His December scan, the one he had as the rash appeared, did show a partial response to the trial medication.)

We've faced this latest setback as a family, and have continued to support Alex in every way that we can. We try to live in the moment, and to not look too far into the uncertain future. We have a family vacation planned for over Easter — a trip we had planned to take next fall, but we moved it up when we learned of the relapse.

We'll just keep taking things one step at a time.

Have you experienced a relapse? How did you approach it? Did you need to change your treatment? Share your comments below.

Carrie Forster is the mother of Alex Forster, a 26-year-old man with autism who was diagnosed with Stage II (bulky) Hodgkin's lymphoma in February 2015. Adding to the complexity of Alex's cancer treatment is the fact that Alex has autism and is nonverbal. His parents have had to learn to be Alex's advocate and voice, especially now during Alex's illness. Alex lives in an adult family home in Appleton, not far from his parents. Alex's family also includes his dad, John, his sister, Jessica, and her husband, Rusty.

ECMO: How This Respiratory Machine Can Effectively Treat COVID-19 Patients

Technology and Heart: 24/7 Remote Monitoring and Care Packages for People with COVID-19