You'd think after more than two years of living with Alex's cancer, I would know better than to be surprised at how quickly things can change. Despite the many detours he has taken, I continue to be surprised. 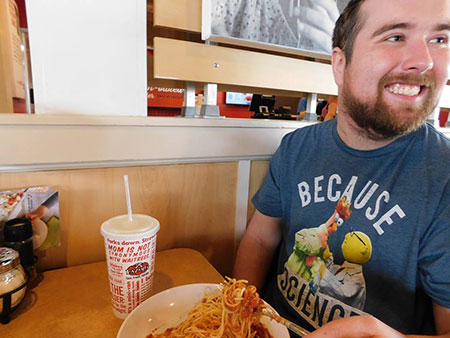 Last time I checked in with you all in March, I updated you on the setback Alex had with a clinical trial. He was in the midst of getting Opdivo for his relapsed/refractory post-stem-cell- transplant Hodgkin's lymphoma. Opdivo was going great, with very minimal side effects.

We had been told to watch for a cough, and a few days before his fifth Opdivo treatment was supposed to take place, he developed a dry cough and some shortness of breath. He started coughing on a Saturday, and by Wednesday evening we were in the ER and his oxygen saturation was only 71. We'd been to the doctor on Monday and Wednesday, and Alex had had chest X-rays both days, but the inflammation in his lungs spread like wildfire. On Monday, we were hoping it was pneumonia. By the time he was admitted to the hospital on Wednesday, it was becoming painfully clear that it was pneumonitis caused by the immunotherapy.

Alex spent a week in the hospital on oxygen and was put on steroids for the inflammation. We had a PET scheduled at Froedtert Hospital on March 21 to see how the Opdivo was working, so we kept that appointment. Now we would see where his cancer was at and meet with his lymphoma specialist to come up with a new game plan, since Opdivo was likely off the table.

The PET revealed grade 3 pneumonitis caused by the Opdivo (his lungs in the PET looked like they were "on fire"), so that treatment was out for sure.

The PET also revealed something completely unexpected and surprising. There was no sign of cancer. Four doses of Opdivo had Alex in complete remission.

We have no way of knowing how long this remission will last. Given how resistant his cancer has been to treatment (he's had seven treatments so far), it is statistically likely to return. We must find that balance of preparing for the worst yet enjoying this time.

Alex adjusted to the good news more quickly than anyone else in the family. I think for myself it was hard to be happy right away because I had prepared myself for another fight — it took a week or so to let go of that momentum and fully realize we have a break now.

This is also another one of many instances when I wish he could tell us what he's thinking and feeling: Having autism and being nonverbal present so many challenges. Despite his inability to articulate his feelings with words, however, he's been clear that he's feeling well.

He's been recovering from the pneumonitis well and they've been tapering him off the prednisone. Just in the last few days, though, the landscape changed again. As he's dropped to a lower dose, his oxygen levels have dropped a bit, and his anxiety has increased. They've increased the prednisone, and we see his local oncologist again next week. It looks like it may take a bit longer to get off the prednisone than we originally hoped.

In the meantime, we really are enjoying his unexpected good news. We know full well that the cancer may — likely will — come back, but we've also learned not to take anything for granted. There's no use wasting today being sad because we might be sad later. Then we'll just be sad twice.

It's been wonderful to see Alex get stronger and I'm hopeful that the doctors will get the medications figured out so that he continues to recover from the pneumonitis.

I don't know what the next twist will be, but when it comes, we'll figure it out. In the meantime, I think we're going to have a wonderful spring and summer.

Have you had unexpected results during your cancer treatment? How did you adjust to the news? Share your comments below.

Carrie Forster is the mother of Alex Forster, a 26-year-old man with autism who was diagnosed with Stage II (bulky) Hodgkin's lymphoma in February 2015. Adding to the complexity of Alex's cancer treatment is the fact that Alex has autism and is nonverbal. His parents have had to learn to be Alex's advocate and voice, especially now during Alex's illness. Alex lives in an adult family home in Appleton, not far from his parents. Alex's family also includes his dad, John, his sister, Jessica, and her husband, Rusty.

Hi, Brigette - Alex is doing well. He was on prednisone for six months and we had to taper super slowly; we tried tapering too quickly and he was back in the hospital for three days in April. I'll PM you with more details.

Curious about Alex's pneumonitis. My husband also has drug induced pneumonitis and is slowly recovering. We were told that it could be a six month process. Did Alex see a pulmonary specialist as part of his team to treat the pneumonitis? Curious in what interval they decreased his prednisone. Would love to connect with you to learn about his process in more detail.

I am so happy for your good news of remission. What a roller coaster you have been on which makes this even sweeter. Good luck and God bless.

Was Cancer an Opportunity?

To Tell or Not To Tell: Sharing a Cancer Diagnosis with Family and Friends