My sister, Kristin Ciganek, was diagnosed with Stage IV colon cancer in August 2012 at the age of 43. As some of you may know, Kristin wrote blog entries for Froedtert. I am saddened to say that Kristin passed away in December 2017. She was truly a unique individual who I don't think the staff at Froedtert Hospital will forget! She almost always had a positive attitude and a smiling face. She was known throughout the Cancer Center, as well as on the floors of the hospital she would get admitted to after surgery or complications. People would make a point to visit her if they saw she was at Froedtert for the day. I went with her to appointments and visits and every time, she would greet people with a smile on her face. She was an oddity, but a breath of fresh air for the staff. They knew not to put on the sad face or talk about cancer with her. 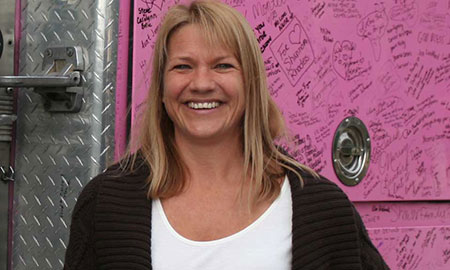 The Cancer Center is a sad place, with sick people everywhere. Especially the Day Hospital, with the waiting room filled with patients waiting to start their chemotherapy. Kristin would say, "this is where the sick people wait," and she often called it the "deprivation chamber." So when she had to wait, she went down the hall with her pager to where staff would eat.

Kristin would contact others who had cancer and talk to them about what to expect, as well as answer any other questions they had for her. She did this through Froedtert, who would ask if she would touch base with certain patients because they wanted to talk to someone who knew what they were going through. Kristin would also get together with them or text back and forth.

Kristin was an awesome firefighter. I myself work for the Milwaukee Fire Department, and I know everyone always wanted her on their crew for the day. She was approachable and physically strong, plus aggressive at fighting fires and had great bedside manner during EMS runs. She was someone you could count on to get the job done. She was friendly to her coworkers and always offered to help everyone out. Plus, she was a great cook.

There are a number of things that I would attribute to Kristin fighting as hard and as long as she did. The one constant in not only her, but all of us who knew her, was hope.

Kristin was admitted to Froedtert Hospital with stomach pain in August 2012. Three hours later, she was diagnosed with cancer. It seemed like news of Kristin’s case traveled quickly throughout the hospital. People were curious, plus Froedtert is a teaching hospital. Lots of doctors talked to us that day, not all of them were hopeful. One even suggested we consider hospice care. We were very sad at the end of the day. But then, a physician assistant came in and said, “you have to meet one more doctor.”

The last doctor we met with was particularly hopeful. He took on cases that would otherwise be known as lost causes. That really played into Kristin’s outlook and attitude.

I remember, he asked her, “What do you hope to do?"

He gave us all hope. That is what she clung to, and so did we, as her family. Hope that she could someday go back to work, be cancer free, live to see her kids graduate and have kids of their own. The hope Kristin had, changed as the disease progressed, but it was always there.

One of Kristin’s attributes, which could be somewhat frustrating at times, was her stubbornness. It worked really well in her case because she was not going to let the diagnosis stop her in any way. If she wanted to do something, she was going to do it. There were times when I would think, "she needs to take it easy," but that is not who she is. Feeling like crap did not stop her. Having to accept that the cancer was not going to go away and that she would never go back to work did not stop her.

She did 5K runs, she took her kids on trips over the summer, she took her kids to school and to their sports games. She would throw parties for birthdays and holidays. Even before her diagnosis, she always talked about how she wanted to travel. She wanted to follow the Brewers from stadium to stadium, to see other places and enjoy baseball. She took her kids on trips to see games too. She was just so active for someone who was sick. I think that is what inspired people the most about her. She was going to get what she could out of life, and she did it with a smile on her face. Looking at her, you would never have known she had cancer.

Something else that helped Kristin fight cancer was having what we called her "carrot” – a goal she wanted to obtain. Hers was going back to the fire department. She had things to look forward to, and I think that made her fight less daunting at the beginning. Unfortunately, she had to give up on that carrot, and her kids became her priority more than ever. Making memories became her goal.

Kristin was able to fight as hard as she did because she had so many people supporting her and helping the family. Meals were delivered on bad weeks; kids were picked up and dropped off when Kristin or Bryon couldn't. She had such a huge support system, which took some of the burden off her hands. (Not going to lie, she sucked at letting people help because she was so stubborn. But in the end, she let people in.)

When a loved one gets a cancer diagnosis, it changes their family members’ lives. It is unbelievable how quickly the ups and downs come and go. So many times we were celebrating one victory, but the next day we were knocked on our asses by terrible news. We were just outsiders living through it beside her, and she was the one who actually was going through it. But every time, she would put her "big girl pants on," put that worry behind her and continue to power on. And she would always bounce back! It was unbelievable, bordering on miraculous.

Losing Kristin was tough on us and on her fire department family. Everyone who knew her would send her good vibes and give her a "you got this" attitude. She believed it, and it worked. We are a pretty positive family, so that always helped every time the punches came. Positive and happy is how I would describe Kristin.

We were constantly offered help with anything and everything. So many people just wanted to do something to help. I wish I knew what to tell anyone living through this situation. Definitely accept people’s offers to help. Meals were a huge help for Kristin's husband and kids. Not having to worry about a meal at night, while trying to adjust to life without their mom at home every day was a big deal. There is a huge void that will be in their lives forever, but food was a godsend during the first couple of months.

When a loved one is diagnosed with cancer, your life is changed forever, but it becomes your new normal. It takes time to get used to it, perhaps you never will. At times, it hurts so much to think about Kristin, other times I think about her and I smile. Talk about your loved one. I never want Kristin to be forgotten. I never want to worry about something triggering tears or sadness because someone mentioned her. I love to hear people remember her, especially her kids.

You are missed, Kristin. If you have a favorite memory of my sister, please leave it below.

Kristin Ciganek grew up in Milwaukee, the second of eight kids – two boys and six girls. She went to Madison High School on the city’s northwest side, and graduated with a bachelor of science degree from the University of Wisconsin-Green Bay, in psychology and human development. So she took a job with the Milwaukee Fire Department – and spent 13 years as a firefighter and two as a lieutenant, until a cancer diagnosis stopped her short in 2012. In late 2017, Kristin unfortunately passed away. Her sister, Sandy, wrote a tribute post  in her honor. Her story was told in a Froedtert Today and in a WITI?TV, Channel 6, news report.

I did not know her, but I will never forget her. Tim Kovacs, Phoenix Fire Department, Arizona USA... A jo Isten aldja meg.

Thank you so much for sharing; Kristin was an amazing lady and your post is encouraging others challenged with health that they are not alone, have goals they can achieve and remind me the blessing that family and friends offer patients. Such posts can be hard to write and I am grateful for you authoring this tribute to her.

Thank you for posting this wonderful tribute to your sister Kristin! I wish I could have met her. I followed her blogs previously and am so, so sorry for her husband, children and family to hear of her passing. My husband also has Stage 4 colon cancer that has spread to his liver and lungs. He was diagnosed over 1-1/2 years ago. He is also a patient of Dr. Thomas after receiving a non-hopeful diagnosis at a different facility. My husband sounds so much like your sister Kristin as he loves to work, loves his family and is very stubborn. He is the most positive person I know. The only difference is he was 20 years older when diagnosed than your sister. I will pray for your family to remember those wonderful memories that you have shared about her.

Sandy,
What a nice tribute to your sister. I am so sorry to hear that she passed away. I hope that during this difficult time you and your family can continue to remember the positive spirit she had.