Once it was confirmed that the lump I'd found in my breast was, in fact, malignant, I went on a research rampage. I dove into anything I could find that had to do with my diagnosis. As an oncology RN, I knew the startling statistic that one in eight women will be diagnosed with breast cancer in her lifetime. What I didn't know was that as a woman under 30, I had an (approximately) 1 in 1,667 chance that I would be diagnosed with breast cancer. Really, universe? 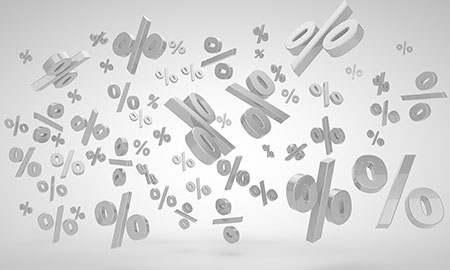 There were some statistics that I was seeking out, such as how certain hereditary and lifestyle risk factors came into play. I found that about 5% of breast cancers are hereditary, and that exercise, hormonal birth control, and alcohol consumption can all play a role in breast cancer development. Maybe I should have eaten organic and made an effort to join a gym. Would that have changed anything? And then I started stumbling upon statistics for things I hadn't even thought about — like learning that with my BRCA1 positive mutation, my chances of developing a contralateral breast cancer (a new diagnosis in the opposite breast) within the next 10 years was as high as a whopping 43.4%.

Treatment-wise, there were statistics on lumpectomy with radiation vs. mastectomy, tamoxifen vs. aromatase inhibitors, five years of tamoxifen vs. 10 years, prophylactic double mastectomy vs. surveillance with breast MRIs and mammograms, and on and on ... and on.

I picked up a book at Barnes and Noble that had a chapter titled "Making Sense of Risk Statistics." In it, the authors explain that just because you have some or most risk factors doesn't mean you'll develop cancer, and just because you DON'T have certain risk factors doesn't mean you WON'T develop cancer, and just because your cancer has certain characteristics, or you choose a certain treatment, doesn't mean it will come back, or not come back. Basically, I came to the conclusion that there were no guarantees for anything, which did nothing to answer the what-ifs going on in my head.

Statistics for the outcomes of these scenarios were abundant, but I could not find answers in any of them. Sure, studies might show that a certain number of patients who do a certain thing have a certain outcome, but what if I happened to be on the other side of that statistic? Let's be real here: I did manage to be the 1 in 1,667 women to be diagnosed with breast cancer in her twenties, for crying out loud. Numbers and percentages became paralyzing. I felt like whatever decisions I made could be the wrong ones. What if I chose the wrong one?

One statistic I came across said that the five-year survival rate for BRCA1 positive women who were diagnosed with Stage I breast cancer (in other words, me) was 84%. When I told Steve this, he said, "So there's a 16% chance that you'll be dead in 5 years?"

I had read that breast cancers in younger women tended to be more aggressive, and younger women had higher recurrence rates and lower five-year survival rates than their older counterparts. I was worried about the cancer coming back, but ... dying? Death wasn't really on my radar until I picked up a book from the library that seemed innocent enough. I felt it would be especially helpful to me because it was about young women — the subtitle was something like Stories of Women "Too Young" for Cancer. Its cover was a gentle pastel pink, the illustration showing the lower halves of four women sporting stylish footwear, all gathered around a table and leaning toward one another, as if sharing a secret or an ice cream sundae. It seemed promising — I figured I could find myself somewhere in these pages. These women were going to show me how I was going to get through this. I was looking for a happy ending.

Spoiler alert: There was no happy ending. The woman whose cancer stats and treatment most mirrored my own got diagnosed with Stage IV recurrence within 2 years and died before the end of the book. She was 29.

The realization that I might not beat this into oblivion was staring me in the face as I read these women's stories, and it was like lighting a stick of dynamite in my chest — it broke me apart mentally and emotionally. I had picked up this book hoping it would promise me a cancer-free future in a way that the statistics I had been obsessing over hadn't been able to. Instead, those abstract numbers and percentages became Jana, Jennifer, Kim and Patti. Jana and Patti get diagnosed with Stage IV recurrence. And Patti dies.

When I told Steve about the woman in the book who had the same cancer stats as me, and how she died at the end, he suggested that maybe I switch my reading material to something a little less stressful — "How about a romance novel or something?" And it's true, I had become quite obsessive about this whole cancer research thing. I was visiting the library frequently and filling my Amazon shopping cart with everything breast cancer. We had books full of post-it notes piled high on our coffee table. Along with these thick breast cancer bibles and pink-plastered personal memoirs, my binge-reading included scholarly journal articles with titles like "Young Age at Diagnosis Correlates with Worsening Prognosis," and "Breast Cancer in Young Women: Poor Survival Despite Intensive Treatment," and "Do Young Breast Cancer Patients Have Worse Outcomes?" (The answer, the authors conclude, is Yes.)

What's the definition of continuing to do something even though it's harming you?

I needed to come up for some cancer-free air. The problem was that I was looking for proof, beyond reasonable doubt, that I was going to make it out of this alive. I wanted these numbers and these women to tell me that I was going to be OK. I wanted to plug all of my personal cancer stats into some machine that would do some calculations and spit out a personalized map of all the correct decisions I needed to make in order to get the hell out of Cancerland. What turns did I need to take? What stops did I need to make? What did I need to pack? What could I leave behind? (My nipples ... I could leave behind my nipples.)

At some point, for the sake of saving my sanity, I had to put a stop to my frantic research. I needed to take a deep breath, have a look around, and learn to accept myself in the middle of it all. I had tried to find myself in statistics, and when that didn't work, I had tried to find myself in the stories of other women's experiences. But people are not statistics, of course, so it's not surprising that I was not finding myself in numbers. And nobody else's story could promise me a happy ending.

I am settling into the realization that my future cannot be defined by the statistics I so hungrily analyzed in the beginning of my journey, nor am I destined to follow in the footsteps of anyone else. Like it or not, my personal experience with cancer is something that cannot be broken down into percentages that can be used to predict anything. Every day that I wake up is another day of navigation into a cancer-free future — for now.

This "for now" can be a scary thing to tack on to the end of my cancer-free declaration, but really, what concept of the future is any of us actually entitled to? Isn't life really just now, today, the present? And anyway, I seem to recall being reminded by someone at some point that life is a journey, not a destination. Destinations imply endings, and so as far as I'm concerned, there's no destination in sight.

How did you approach your cancer? Did you read everything you could? Did you look for statistics that would give you hope? Share your comments below.

Marloe's passion for women's health and wellness has intensified with her recent diagnosis of breast cancer, at age 29. Despite her professional experience in oncology, traveling through the cancer world was mystifying and lonely. Finally on the upswing of her treatment, she is continually looking for ways to support others who are facing this incredibly personal journey.

Dear Marlo,I love your blog! Your words and the words of other cancer bloggers have really helped me through my breast cancer journey. I am in the middle of my 4 months of chemo, which will be followed by surgery and possibly radiation. I have chosen not to read anything on the internet about my cancer or compare myself to anybody else. As soon as I do, I am immediately filled with dispair and anxiety. Instead I have chosen uplifting and positive stories. The one I am reading now is Faith, Hope and Healing! Inspiring Lessons Learned from People Living With Cancer, by Bernie Siegel, MD. It's an absolutely beautiful book! Check it out! I know you will have your bad days, but I pray that you can stay positive and hopeful and not let those statistics get in the way of a long, healthy future!

Yes, as we go through the journey, we need to make time for "cancer-free air." I, too, am just beginning to navigate the "cancer free ... for now" path. Actually, in my case it is a "probably cancer free for now" situation. In the long run, there is nothing I can do about it ... for now. You said your future cannot be defined by the statistics - I wholeheartedly agree. I've only had this conversation with one friend since my diagnosis (15 months ago) but I told her, and fully believe, that even if my chances were 1 in 99 for surviving over 3 years, there is no reason I will not be that one percent. My chances are much better than that but I wanted to illustrated the necessity and power of optimism and hope even as we try to be well-informed and practical.

Thinking of you, Marloe! You are a courageous woman!