I already knew it was cancer. I had absent-mindedly palpated the lump for months. In the shower, or at work, just under the collar of my scrub top. Eventually I began to notice its outline in the mirror. An imperfection in porcelain skin, midway between clavicle and nipple. Cancer. 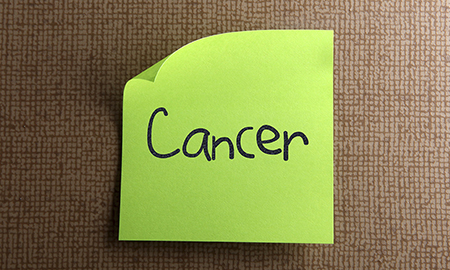 But I was too busy to make an appointment. We had recently moved to Milwaukee, and I didn't have a primary care physician with my new insurance yet. We were house-hunting, dealing with our realtor.

When I finally showed my husband the lump, we ended up joking in our living room. "IT'S NOT A TUMOR!" we declared, in our best-worst Arnold Schwarzenegger impersonations. If it was funny, it wasn't cancer.

But then one day, instead of joking about it, my husband said, "I think it's getting bigger." Yeah, I lamented, I should really get it checked out. I finally called to set up a new patient appointment with a PCP. I did not mention the lump, and was scheduled a month out. It was probably nothing.

At the appointment, I felt silly mentioning the lump and my concerns about it. Would she think I was over-reacting? I hastily mentioned my grandmother — my grandmother, who died in her 40s from metastatic breast cancer. As I spoke, I had a vision in my head of my doctor laughing, telling me I was crazy to think it was cancerous. Instead, she pursed her lips as she palpated the lump and asked, "How old was your grandmother, exactly?"

I was scheduled for a mammogram and an ultrasound, my first of what would be many appointments at the Breast Care Center.

It was another couple of weeks of waiting for these appointments. I researched online for benign breast lumps, mentally going through all of the things my lump could be. All of the things it probably was. Because it probably wasn't cancer. It was probably a cyst, maybe a different benign lesion. I scoured the Internet for non-cancerous breast conditions and jotted down the possibilities, however obscure, in pencil on yellow sticky notes at work. I carried these lists around in my scrub pockets. Fibrosis, they read. Benign hyperplasia, adenosis, fibroadenomas, phyllodes tumors, intraductal papillomas, granular cell tumors, oil cysts.

I went to my mammogram and ultrasound alone, and then to the biopsy that was recommended for my concerning lump. I did not ask my husband to come to this appointment either. In hindsight, this was stupid. I have never felt so alone in my life as I did on that biopsy table, my body propped up at an awkward angle by a large triangle pillow under my left shoulder, my arm stretched up and arched over my head, the steady whir of medical machinery keeping time to my pounding heart. My neck ached from straining to see my tumor on the ultrasound screen, its "uneven margins" fading in and out with the swoosh of the ultrasound wand. The biopsy gun clicked mercilessly, and I watched the needle pierce the lump over and over, angle after angle, eating away at the abstract blurry oblong white blob on the screen. The radiologist was silent, the nurse was silent, and I was silent, too.

After a particularly sharp jab I sucked in a deep breath and the tears started. The surrealism of the situation overwhelmed me. Was I — an oncology nurse — really here, lying on a biopsy table, in a cancer center, as a patient? The radiologist was quick to draw up additional numbing medication before proceeding, but I tried to tell her it wasn't the pain. I managed to mumble an apology for my tears and for making them pause to calm me. "It's probably nothing," I ventured, my pleading words left hanging heavily in the darkened room. The radiologist could not tell me it was probably nothing. Neither could the nurse. The angry click of the gun began again, and I fought tears with shaky, gulping breaths. Why didn't I bring my husband to this stupid appointment? Why did I insist this wasn't going to be a big deal? I think I thought that if I didn't bring him, if I didn't say the words, if I held onto that list of benign possibilities scribbled in pencil on the yellow sticky notes in my scrub pockets, I could will those cancer cells to become ... cancer-less. As if my silence could prevent their existence. As if ignoring them would render them incapable of harm.

My biopsy was on July 3rd, and because of the holiday and the subsequent weekend, I ended up waiting five days for the results. During that time, I received an automated email from MyChart, notifying me that my ultrasound and mammogram results had been posted to my account. I opened the links to each report and skimmed past medical jargon that noted my mass to be "hypoechoic with microlobulated margins." And then there it was, in all capital letters: "SUSPICIOUS OF MALIGNANCY."

Suspicious, I thought; malignant. I read these words over and over until they became like a foreign language, until they became nonsensical. No one had told me yet that I had cancer. The word was not uttered once throughout all of my appointments as a possibility, and I was still waiting for the phone call regarding my biopsy results. But the sticky-note-scribbling part of me was finally giving in to the part of me that just knew. I had spent the last weeks, months even, being consumed by thoughts of a cancer diagnosis while simultaneously denying that cancer was a possibility. The words on the screen were finally proof that this "probably nothing" was turning out to be "definitely something."

It would be two more days before that "something" was officially labeled "cancer," and I would take on the identity of Cancer Patient, Cancer Survivor.

Did you suspect you had cancer before you were officially diagnosed? Did you try to find other explanations for your symptoms? Share your comments below.

Marloe's passion for women's health and wellness has intensified with her recent diagnosis of breast cancer, at age 29. Despite her professional experience in oncology, traveling through the cancer world was mystifying and lonely. Finally on the upswing of her treatment, she is continually looking for ways to support others who are facing this incredibly personal journey.

This sounds exactly like my current story. I’ve had two large breast lumps. One has been there several years, the other is fairly recent. I just assumed it was nothing because I’m 26, surely it can’t be something. But I went for my yearly and the doctor checked it and wanted a mammogram and ultrasound to be sure.. well for the results back with “suspicious of malignancy” and here I am trying to think positive. Waiting to be scheduled for a biopsy.

Augh, it stinks to get those unsettling words on your imaging report! But you are right to be thinking positively -- lots of times, even when that word "suspicious" is used, it really does just turn out to be a benign, non-cancerous finding. Of course, that can't be determined without a biopsy to know for sure. I'm really glad that your PCP did not dismiss your symptoms just because you are a young woman. Getting anything new or different checked out is so important, no matter how young or old you are. Take care, and I will also be sending positive vibes your way!

I was 29 and had went to my PCP because I was having breast pain for the last 8 months. So my doctor sent me to have an ultrasound. The first ultrasound revealed I had a small mass that may be benign and I need to report the ultrasound two more times over a 6 month period to be sure. I went for my last ultrasound 7/30/2019. The mass has gotten bigger and it stated that I have a suspicion of malignancy. So now I have to have a biopsy done . I am a little worried because the first two ultrasounds said benign and now its suspicious! I will be 31 on 8/31.

Hello! Thank you for reaching out. It sounds like you have been doing everything right, first by getting your symptoms checked out by your PCP, and then by following the recommendations of your radiologist to monitor the area with imaging over time. It can be scary to be told that additional tests need to be done! There are a lot of other non-cancer findings that can lead to a biopsy recommendation, but the only way to know whether or not there is a problem is to get some tissue samples checked out. Taking it one day at a time is easier said than done, I know, but it can help you get through whatever comes your way. Good luck!