There Is Hope. I Survived. 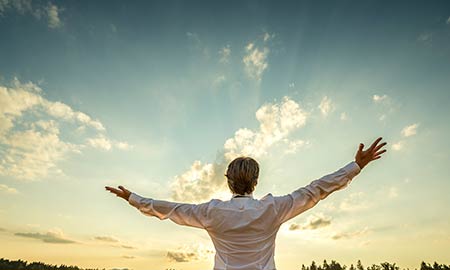 In Nov. 2005, I was diagnosed with an aggressive type of non-Hodgkin’s lymphoma called mantle-cell lymphoma (MCL). Back in 2005, it was classified as incurable. There were treatments that would extend your life, but nothing that would cure the disease — only extend your life for a little longer. Back then, the treatments were very hard, physically and emotionally.

I didn’t go into treatment right away because my tumor burden was low and there was no rush to treatment. I entered the realm of “watch and wait.” I went through a CT scan every three months, and when the tumors showed signs of increasing, then we’d make additional plans and decisions.

When it was obvious I needed to start treatment (chemotherapy), then that’s what happened with me. I went through numerous cycles of treatment, and twice I was declared to be in remission. One of the hallmarks of MCL is that it likes to come back, and twice it did. Eventually, I became chemo-resistant and had to take a very big “next step” in treatment: a stem-cell transplant. I was fortunate that one of my brothers was a perfect match to me in every category checked. On Oct. 25, 2012, I got my brother’s stem cells and waited for my new immune system to grow into my body. Oh, there were several weeks of significant graft-versus-host disease (GVHD) issues, but eventually I was released and declared to be in remission.

Did I mention that MCL likes to come back? Even after a stem-cell transplant, it started to rear its ugly head a few months later. Eventually, a drug was approved as a treatment for MCL patients who relapsed after transplant. That drug, Revlimid, activated my new immune system, and I remain cancer-free to this day!

Was this easy? Hell, no!!! This was THE hardest fight in my life; nine years of ups and downs (emphasis on the “down” part) and wins and losses. There were so many times when I felt helpless and hopeless, and so many times when it was hard just to wake up the next day. Anyone who has finished a battle with cancer knows what I’m talking about. Now you, new cancer patient, now you’re looking for words of encouragement and help. That’s why you are at this website. Twelve years ago, I was told that my cancer was incurable — today I am cancer free and that’s past three years now! How do you fight? How do you maintain? How do you approach a new day with cancer? Read my “Seven Steps of Persistent Perseverance,” and you’ll find some tools I learned about in my nine-year journey with this disease.

As a closing, I would require of you and your family persistence! Persistence in keeping an attitude that says, “I CAN SURVIVE!” Persistence in trusting your medical team because they are THE best around! I recall when I was first diagnosed that people screamed at me that I had to go to M.D. Anderson in Texas. Well, I found my solution at Froedtert & the Medical College of Wisconsin cancer network, and I didn’t have to go to Texas.

Finally, friend, I want you to be persistent in putting these seven steps into action each and every day. They helped me keep my head above water, and it is my hope and prayer they will do the same for you. I pray for cancer patients every day.

How are you persistent? What steps are you taking to keep an "I can survive" attitude?

Paul J. Lawonn has more than 37 years of industrial safety and leadership experience and has provided consulting to more than 100 companies. Prior to his cancer diagnosis in 2005, Paul led the safety function at Harley Davidson’s Milwaukee power train operations manufacturing plant. His last position with Harley was corporate safety manager for compliance and employee training. He was diagnosed in 2005 with mantle-cell lymphoma but waged a successful nine- year battle and is now cancer-?free. Paul’s priority now is on inspirational and motivational speaking, writing, and coaching. He is particularly fervent about donating his time to charities that finance and fuel cancer research and organizations that provide assistance to cancer patients and their families. He’s written a guide to fighting cancer that he calls “Seven Steps to Persistent Perseverance.”