Waging the War on Cancer

My dad was a WWII vet. Like many others of his era, he never really talked much about his experiences "over there." However, some veterans do tell their tales of survival in order that others may learn from them. There are also those who use sharing their stories as a self-help therapy to recover from the trauma they experienced. It is somewhat how we treat cancer and survivorship. 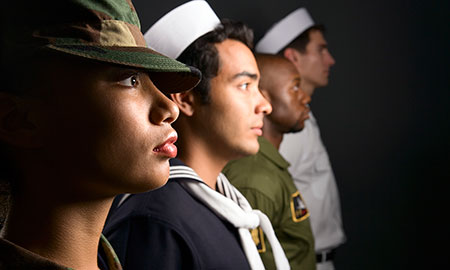 Did you ever notice how we use military terms to describe the effort to eliminate cancer? Cancer starts as a turf war inside our own bodies as rogue cells begin their invasion. Search and destroy missions ensue. We wage war on cancer and use an arsenal of weapons to annihilate it. There are surgical strikes, chemical weapons and radiation blasts. We run the risk of collateral damage such as deactivated thyroids and a higher risk of having to fight Cancer War II. We keep up our strength with Ensure and Boost, our very own MREs (C-rations to you old timers).

Our uniforms are t-shirts emblazoned with catchy anti-cancer slogans. We wear makeup and headscarves like camouflage to hide the effects of treatment. The scars cancer warriors bear from biopsies, ports and other procedures are considered badges of honor.

William T. Cummings, a minister who served at Bataan, is known for declaring, "There are no atheists in foxholes." Like soldiers at war, many of us have had our faith strengthened while waging this battle. One could certainly find many more military metaphors.

Those who fight the war are sometimes called heroes, although I feel the term is misapplied in my case. I was fighting to save only my own life and really had no other choice than to fight. Bravery isn't the right term either, although I certainly followed doctors' orders like a good soldier. Eventually, we reach remission, an uneasy detente with any remaining cancer cells. Many survivors win the war and are given the ultimate promotion to "CURED."

I tend to think of us, not so much as survivors, but as veterans. We are ready to give support to the newly conscripted. (No one volunteers for this army!) Like veterans, it has been discovered that some cancer survivors develop a form of post-traumatic stress disorder (PTSD).

Support services are available through hospitals like Froedtert and the American Cancer Society. Like a VFW post, one can find a local support group for just about any type of cancer. They are all good resources, but sometimes it might be best to just listen to the veterans tell their war stories. Just as governments expend much effort to prevent wars, researchers are on the front lines in this battle, too.

Someday soon, we hope the War on Cancer will be written about in the history books and there will be no more need to fight!

Have you compared your cancer treatment to a fight, a battle or a war? Share your thoughts below.

Since she was a young girl growing up in Wauwatosa, Beth Dowhen has loved teaching. Eventually Beth received a phone call from the principal of Wisconsin Lutheran High School asking if she would consider teaching there. After 19 years, Beth reluctantly left the school and students she loved because she had developed an undiagnosed medical condition that left her exhausted after a day in the classroom. For two years, Beth and her doctors tried to solve the mystery. Eventually, Beth was diagnosed with Stage 4 squamous cell carcinoma at the base of her tongue. No one suspected oral cancer since Beth was a nonsmoker, nondrinker, and HPV negative. Beth has received radiation and chemotherapy and some complementary acupuncture therapy, and now her scans show no evidence of cancer. She's returned to teaching, this time as a volunteer parenting coach at a counseling center.