Does traumatic injury seem like something that happens only in movies and on TV? The fact is that trauma touches thousands of people in our community every year. Understanding more about the reality of trauma can help people make safer choices.

Most traumatic injuries result from a small number of common “mechanisms of injury.” You may be surprised to know that people with injuries related to falls are the largest population we treat in our adult Level I Trauma Center.

People who fall from a standing position or who trip while walking are most at risk for hip fractures. Falling from a height (for example, falling from a ladder or down a staircase) often results in head trauma, rib fractures and other orthopedic injuries. As with crash injuries and other forms of trauma, falls represent a greater risk for the elderly.

Older people generally recover much more slowly from injury. In addition, common heart medications complicate the injury/recovery process. For example, people who have suffered a laceration may have trouble clotting if they are on blood thinners. Medications can also interfere with normal physiologic responses to injury.

For instance, one of the body’s normal responses to a drop in blood pressure following an injury is increased heart rate; but patients taking medications to slow their heart rate will lack this protective response. Learn about our Fall Prevention Program.

People involved in automobile crashes are less likely to die today than in the past, thanks primarily to safer vehicle design and better safety systems. However, motor vehicle crash is still a major cause of traumatic injury. Crashes are not “accidents” but the result of human error or risk-taking—driving too fast, drinking and driving, distracted driving, etc. The most common crash injury is bone fracture, often involving multiple breaks. Bone fractures can require extended rehabilitation, and crash victims may take months to fully recover their abilities.

Elderly people face heightened risk following a crash trauma. Injuries that are not usually life-threatening for a younger person can be fatal for the elderly. For example, an older person with compromised lung function will have difficulty recovering from multiple rib fractures. 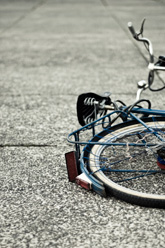 People involved in a cycle crash while not wearing a helmet are at serious risk of head injury. Brain injury has one of the highest mortality rates of all crash outcomes. Other common cycle crash injuries include bone fracture, with significant danger of spinal fractures leading to paralysis.

It is important to know that people who have sustained a brain trauma may appear to be uninjured in the minutes following a crash. However, if there is undetected bleeding inside the skull, the individual’s condition can deteriorate rapidly. That is why paramedics often press seemingly unharmed crash victims to go to a trauma center for evaluation. Watch our Helmet Safety Video.

When people turn violent, they usually direct their assault on the victim’s head. As a result, the most common injury in assault victims is head trauma. Specific problems include facial fractures and brain injuries. In addition, some assaults result in spinal injuries. When an assailant uses a gun or a knife, the victim usually sustains wounds to the chest and/or abdomen. The major risk for these patients is internal bleeding. All assault injuries carry a significant risk of death or chronic disability.

What You Need To Know About Gun Violence Prevention

Four Ways To Reduce Your Fall Risk From Medications

Violence as a Disease: Innovative Program Aims To Stop the Spread of Gun Injuries