Great Quotes: Stupid Is as Stupid Does!

Thank you, Forrest Gump, for those few short words of wisdom. Stupid — that is a good word to describe what you currently hear on the radio and what you see on TV these days. Our country is knee-deep in a presidential campaign, and you know what that means — stupid talk — stupid promises — stupid analysis — stupid predictions and most irritating — stupid commercials. Can you believe how crazy some of those political commercials actually get? Yikes! 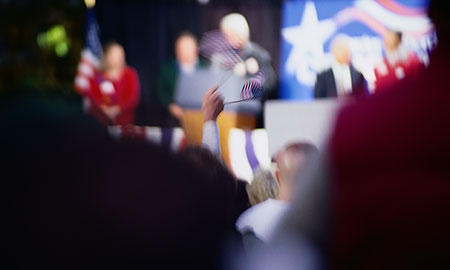 Today, I write about election season from a whole different perspective. Four years ago, during the last presidential campaign, things were different. Right about this time (March 2012), after my mantle-cell lymphoma relapsed, I was finding out that my body was now chemo-resistant and the next step in treatment would have to be a stem-cell transplant.

Many of you know the feelings you go through when you relapse; it hurts with a big hurt. All the elation of being "dubbed" in remission is pulled out from under you when it is confirmed that the cancer has returned.

I remember the first few months of 2012. January started out with those feelings of elation and "beating" cancer. When lymph nodes started to show up a month later, that sinking feeling in my gut started all over again. When it was confirmed my MCL had returned, I swallowed hard and acknowledged I would go through some additional cycles of chemotherapy.

But then things were different; chemo was not having an impact on my MCL and a different approach was necessary. The next step in treatment would be a stem-cell transplant. Without going into too much detail (because I could write several pages simply on the thought of a stem-cell transplant), the decision my wife and I made was to move forward with a transplant, and we would have it done at Froedtert.

Here, I'll condense that story down to this: All the plans were made, a brother of mine was a perfect stem-cell match and transplant day was Oct. 25, 2012. In between all of that, my very first grandchild was born. Ah, sunshine for sure...

After a stem-cell transplant, there will be GVHD (graft vs. host disease) issues. The intensity varies from patient to patient. I had some significant GVHD issues, and I was on the BMT floor about five weeks. My kidneys and my liver were all in trouble, and I knew it was serious by the painful look on my wife's face.

While I was in the hospital, the 2012 presidential election took place, and Mr. Obama won his second term in office. Back then I didn't really concern myself about all of that. My attention was on my own individual fight to stay alive.

There, during those troubling weeks of GVHD, I learned there are much bigger issues in life than election rhetoric, football games and wars overseas. Right there, I learned a very basic fact of life: Go negative and give up, and you might die; stay positive, fight hard, focus on the real issues and you might pull through.

Now, 4 years later, I know the "stay positive" plan worked: I'm cancer free. And right there is a nugget of truth for you — as you fight your way through your treatments and your pain — stay positive and focus on the real issues; don't get caught up in the stupid stuff!

I don't suffer through presidential politics anymore, and I don't care too much about all the "gotcha" issues people look to throw at a candidate. Today, I focus now on rebuilding my life. That granddaughter that was born in 2012 now has a sister, and I'm having twice the fun being Grandpa! When my 3-year-old granddaughter comes over and announces "Grandpa — let's run!," it is get-up-off-the-couch time and run through the house; hopefully, she tires before I do….

As the presidential and local spring elections start heating up, all the rhetoric just rolls off my back. I'm not going to get caught up in all the stupid stuff because I know there are way more important issues to focus my attention on; little granddaughters being one, and rebuilding my life the other.

Don't get caught up in all the stupid stuff you hear on the radio or watch on TV: Focus on THE one big issue you need to focus on right now — getting better and planning for a future. I've got some ideas that might help you in that endeavor. Read through my Seven Steps of Persistent Perseverance and glean from them some words of encouragement. These Seven Steps are a summary of what I learned in my 9-year journey with cancer and how I learned to keep my head above water.

What makes you reflect back on your cancer diagnosis and treatment? How has your perspective changed since then? Share your comments below.

Paul J. Lawonn has more than 37 years of industrial safety and leadership experience and has provided consulting to more than 100 companies. Prior to his cancer diagnosis in 2005, Paul led the safety function at Harley Davidson’s Milwaukee power train operations manufacturing plant. His last position with Harley was corporate safety manager for compliance and employee training. He was diagnosed in 2005 with mantle-cell lymphoma but waged a successful nine- year battle and is now cancer-?free. Paul’s priority now is on inspirational and motivational speaking, writing, and coaching. He is particularly fervent about donating his time to charities that finance and fuel cancer research and organizations that provide assistance to cancer patients and their families. He’s written a guide to fighting cancer that he calls “Seven Steps to Persistent Perseverance.”