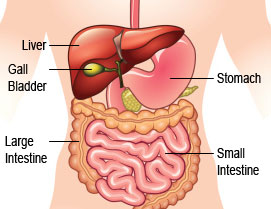 The liver is located in the right abdomen, above the stomach. It is the largest internal organ in the human body, and it performs several important functions. One of its main jobs is to produce bile, a thick fluid that helps the body digest fats. The liver also removes toxins from the bloodstream, processes and stores nutrients absorbed from the intestines, and produces clotting factors that help stop bleeding from a cut or injury.

There are two broad categories of liver cancer — tumors that originate in the liver itself (primary liver cancer) and cancer that has spread to the liver from other parts of the body (secondary, or metastatic liver cancer).

Unfortunately, patients with primary liver cancer often do not experience any symptoms until the disease is at an advanced stage. When symptoms do appear, they can include:

More than 24,000 new cases of primary liver cancer are diagnosed in the U.S. every year. Most primary liver tumors are the result of chronic liver disease.

Over the last 20 years, primary liver cancer has become much more common in the United States, mainly because of the spread of chronic viral hepatitis. Men are more than twice as likely as women to develop this cancer.

Because the liver is made up of different types of cells, several types of cancer can form within the liver. The most common forms of primary liver cancer are Hepatocellular Carcinoma (HCC) and Cholangiocarcinoma.

A primary cancer that begins in the hepatocytes, the cells that make up the main functional part of the liver. Approximately three out of four primary liver cancers are hepatocellular carcinoma (HCC), sometimes referred to as hepatoma. Some hepatocellular carcinomas begin as a single tumor that grows and later spreads to other parts of the liver. In other cases, hepatomas begin as many small tumors scattered throughout the organ. This cancer may spread elsewhere in the body.

Cholangiocarcinoma is a cancer that starts in the bile ducts — the tubes that connect the liver and the gallbladder to the small intestine. About 10 to 20 percent of primary liver cancers are cholangiocarcinomas. These tumors are classified as:

There are also several kinds of non-cancerous tumors and that can arise in the liver, including hemangiomas, adenomas and cysts. Some of these carry a risk of becoming a cancer.

Most liver tumors are cancers that have spread (or metastasized) to the liver from other parts of the body. The most common source of liver metastases is colorectal cancer. Other frequent sources are cancers of the breast, lungs, stomach and pancreas, and neuroendocrine tumors.

Patients with metastatic liver cancer frequently do not experience any symptoms related to their liver tumor. When symptoms do arise, they can include jaundice and other common indications of liver disease.

Physicians use a variety of tests to diagnose liver cancer and determine the extent of a patient’s disease.

To find out more about advanced diagnostic techniques available at Froedtert & the Medical College of Wisconsin, read Imaging the Liver, Pancreas and Bile Ducts.