Even with a willing living donor, nearly a third of adult kidney transplant candidates will not match with their intended donor due to blood type or tissue incompatibility. Participating in kidney exchange programs, as we do at Froedtert Hospital, significantly improves access to potential compatible donors around the country.

Kidney exchanges also can dramatically decrease the time recipients need to wait for a kidney. The average wait time for a kidney transplant facilitated through the National Kidney Registry – of which Froedtert Hospital is a member – is 11 months.

How a Kidney Exchange Works 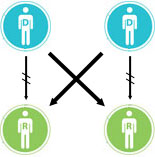 Kidney chains involve more donors and recipients, so they have the potential to secure more compatible donors for recipients involved. Chains begin when a good Samaritan or non-directed donor steps forward, often on behalf of an incompatible recipient, and willingly gives a kidney to an unknown recipient. In return, the incompatible recipient will receive a kidney from another donor. 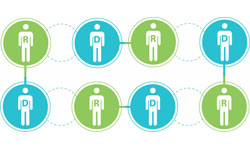 One kidney chain typically facilitates six transplants, but in some cases, many more may be involved. In 2013, the End-Stage Kidney Disease and Kidney Transplant Program at Froedtert Hospital was one of 19 in the United States involved in the world’s second largest kidney exchange in history, which involved 28 donors and 28 recipients.

Transplant and the COVID-19 Vaccine

Bonded for Life: A Kidney Transplant Deepens a Brotherly Bond