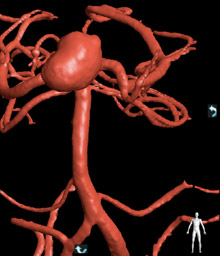 A brain aneurysm, or cerebral aneurysm, is a bulging, weakened area in the wall of an artery in the head.

A brain aneurysm, or cerebral aneurysm, is a weak spot in a blood vessel wall in the brain. It may be present at birth or develop after an injury. Symptoms include sudden severe headache, nausea, vomiting, visual difficulties and loss of consciousness.

There are several minimally invasive treatments for patients with a brain aneurysm. They involve “endovascular” techniques accomplished by navigating a thin catheter (hollow tube) through the blood vessels to the location of the aneurysm. Some techniques close off the aneurysm, while others use “flow diversion devices” to route blood flow away from the aneurysm and down the normal course of the blood vessel.

Coil embolization, or “coiling,” is the most common endovascular treatment. Physicians use a catheter to place tightly packed platinum coils within the aneurysm to encourage clot formation, close the aneurysm, and prevent bleeding into the brain.

Placing a clip at the base of the aneurysm is another method of treatment. The clip stops the blood flow to the aneurysm, keeping it from bursting or leaking blood into the brain.

At Froedtert & MCW health network, we are able to perform aneurysm clipping by making a small incision in your eyebrow followed by a small opening in your skull. In addition to a smaller incision and smaller skull opening than traditional approaches, it is a shorter procedure with less recovery time. After healing, the tiny scar is covered by your eyebrow hair. There is also less pain and scalp numbness than there is with a standard approach.

The eyebrow approach to clip an aneurysm carries the same risks as other approaches. It takes about three hours to complete the procedure. You can expect to spend one or two days in the hospital followed by 10 days at home with minimal lifting. After that, you can return to your normal activities.

The Froedtert & MCW aneurysm treatment team is one of only a few centers that offer the eyebrow approach — and possibly the only one in Wisconsin.

Timing Is Critical When It Comes to Care for Stroke Patients

When a Stroke Strikes: Fast Responses and Seamless Care